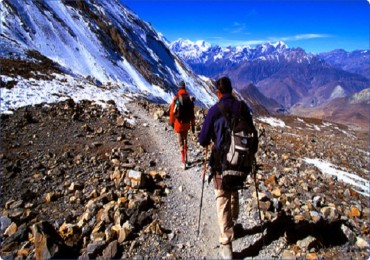 Trekking is the most popular activity in Nepal, and travellers will be amazed on the streets of Kathmandu and the trekking hub, Pokhara, with guides, organised tours and gear for sale or rent. The huge variety of option for people of different age groups like beginners,amateur and professional level of trekking.While you could spend a year planning an expedition to wild and lofty places that few would dare an attempt, you could also arrive in Kathmandu with no plans and be on the trail in a matter of days.
Despite what many may perceive, trekking in Nepal is not necessarily wandering alone through an uncharted wilderness. As they walk along the well-marked trekking paths, travellers will often discover quite opposite; hundreds of locals passing through each day as they haul food, water and other odd necessities back to their tiny villages, along with dozens of fellow trekkers. The regularly-spaced villages and teahouses allow trekkers good opportunities to rest and recover, either for a few minutes or the night. The strong -rigid and hospitable smile of nepalese people can be seen.
The best seasons for trekking are the dry and warm seasons, March-June and September-November. During these times, the temperature is bearable and skies are usually clear, although the skies are foggier and the rain begins in May-June.
The Great Himalayan Trail is a 1,700km trek that connects all the main trekking areas.The spectacular view of  glowing mountain ranges can be clearly viewed.

Annapurna Sanctuary (14 days) - an oval-shaped plateau located 40km north of Pokhara, at 4,000m above sea level. Trek through the sanctuary to Annapurna Base Camp.

Annapurna Base Camp (7-10 days) - can be reached via various routes.

Poon Hill (3-5 days), at 3,210m above sea level, northwest of Pokhara, is the most famous viewpoint in Western Nepal.

Jomsom Muktinath Trek (5-10 days) - treks to Jomson, a village on the other side of the Annapurna mountains that can also be reached by air, and Ghorepani, a village that is 2,750m above sea level. This area is always very windy.

The Royal Trek (3-4 days) - an easy trek with an excellent view of the mountains and local villages. The trek was made famous by Prince Charles.

Sikles Trek (4-7 days) - a camping/homestay based trek through the villages and the Gurung settlement of Siklis.

Kande to Australian Camp to Pothana to Dhampus to Phedi, or reverse (3-4 days) - an easy trek for those that do not want to try more challenging treks.

Gurung Heritage Trek (5-7 days) - Hike through the villages of the Gurung ethnic group, known for being humble with a great sense of humor.

Upper Mustang Trek (12-16 days) - the former Kingdom of Lo that has a culture very similar to Tibet, has amazing Trans-Himalayan scenery although it is a difficult trek because of high altitude, exposed terrain and continuos strong winds.

Naar-Phu Valley Trek (12-15 days) - a hidden Tibetan valley just north of the Annapurna Circuit which was opened for visitors in 2002. Entrance is from Koto near Chame, and exit  through 5300m high Kang La pass to Ngawal. A few basic lodges, but camping style trek still recommended.

Dolpa Trek (15-21 days) - Upper Dolpa is the remote Land of the Bon, almost as Tibetan as Nepali. Lower Dolpa is more accessible and can be reached by plane.
Manaslu Trek (14-21 days) - Manaslu is the 8th highest mountain in the world at 8,156 meters above sea level. Hike unspoiled trails through remote villages and over the Larke pass at 5,135m (stay at the new lodge) to circuit the mountain. Some lodges are currently still a little basic, so it remains for the adventures, though camping it is not necessary. This area is still restricted and you are required to have special permits and the services of a guide.

Langtang & Helambu - a short taxi ride from Thamel to the roadhead at Shivapuri leads to a trail through the middle-hills countryside of Helambu, either circuit around and return to Kathmandu or cross the pass to the sacred lake at Gosainkunda, descend and then hike up to the Langtang valley beneath mountains that form the border with Tibet.

Mount Everest region
Khumbu - Take the bus to Jiri or fly to Lukla then hike up to Namche, capital of the Sherpa lands at the foot of Everest.

Everest Base Camp Trek / ascent of Kalar Patar - Visit the Buddhist Tengboche monastery for the Mani Rimdu festival in November. Explore the Gokyo valley with its sacred lakes and stupendous views of four 8000m peaks. Or a circuit of the region crossing the high passes or Cho La and Renjo La.

Island Peak Trek (trekking peak) - takes in some of the most spectacular scenery in the Himalayas.