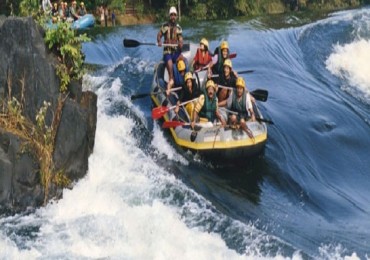 Rafting in Nepal is the abode to eight out of fourteen highest peaks in the world along with vivid and convoluted Hindu religion and the Buddhist monasteries. This snow fed or monsoonal rain fed rivers smash down in the foothill on the way to the Great Plains and finally to the Ganges. Nepal has earned a name for itself for being the best destination in the globe for the white water rafting.
Nepal's undulating water flowing from the glaciers of the majestic Himalayas, offer the unsurpassed thrills for Rafting and submerge oneself to the scenes and waves of water. Our well experienced river guide glides the boat into the rivers enjoying all the thrilling, wild and crazy rapids. The safety factor would be taken seriously.
Rafting Grades:

Grade I: Easy: calmly moving water with sporadic minor with few or absence of hindrances.
Grade II: Moderate: Small rapids with steady waves. Though, it requires a little bit of guts but easy to navigate.
Grade III:  Difficult: Rapids with more irregular waves and hazards are present. More difficulty in tripping but the routes are quite predictable. Scouting from the shore is required occasionally.
Grade IV: Very Difficult: here the rapids are large and require more manicuring to prevent dangerous hazards. Scouting from the shore is quite necessary here and rescue is generally difficult. Turbulent water coming with the threshold of velocity and large waves may flip the rafts.
Grade V: Extremely Difficult: here the rapids are very elongated and very violent which can cause severe Hazards. Uninterrupted and dominant water coming from all the possible directions sometimes make route finding quite difficult.
Grade VI: Nearly Impossible: Difficulties of class 5 carries to the extreme of navigability. Might possibly (but not probably) be run a team of experts at the right water level, in the right conditions, with all possible safety precautions, but still with considerable hazard to life.

Trishuli river rafting is one of the popular river rafting and is easily accessible from Kathmandu as well as Pokhara. The source of this river is in Gosainkunda and according to Hindu mythology Lord Shiva threw his trident in rocky mountain to create three springs ultimately giving rise to this river. The river comprises of some thrilling gorge in the lower part as it cuts the 2000m high Mahabharat range to make its way out. This is the ideal destination as it’s excitingly rapid, not too difficult and has an easy access from Kathmandu and Pokhara. The water flow in Trishuli River is big, bouncy and has relatively safe flips where the probability for accidents is very low. For the first timers; the experience of river rafting in Trishuli River is a must do thing.
The most luring part of this trip is that the raft comprises of Scenic valleys, thrilling gorges, moving rapids as well as easier sections all in perfect amount giving a blast for first timers or experienced ones. This trip can even be combined with Pokhara and Chitwan tour.

Kali gandaki River Rafting is The mighty Kali gandaki begins its journey from Tibetan Plateau in Upper Mustang through the deepest gorge in the world finally emerging out from the middle of Annapurna massif and Mt Dhaulagiri.  It got its name after the goddess Kali known for her furiousness and brutality. Kali gandaki is the best option for whitewater river rafting.
The Kali gandaki river raft comprises of valley with scenic beauty, peaceful beach, remote villages and mind-blowing mountain vista which gives you an adrenaline rush. This class III to IV + river bestows us with thrilling slides and tumultuous torrents which keep the paddlers busy against all technical rapids. Such a diversity cannot be found anywhere in a 3 day raft but Kali gandaki seem to be generous to give us that opportunity.

Bhote koshi is a snow fed river situated 70 km east of Kathmandu valley. Among seven best whitewater adventures in Nepal Bhote koshi is one of them. Bhote means Tibet and Koshi means River in Nepali so literary Bhote Koshi means River that is originated from Tibet. Bhote Koshi flowing vigorously with a thunderous sound is steeper in Nepal creating a violent flow throughout the whole year making it desirable for each and rafting enthusiast. The steeper it is the more water current increases making the rafters paddle to the utmost level. Best described as the liquid rush; Bhote koshi offers the magnificient mountain vista.
It also serves as Bhote koshi hydroelectricity project that supplies 45MW electricity. This river demands for two days to raft here; in first day we will raft in lower section of IV grade and the next day we will raft in the upper section of V to VI grade. Technically it is the steepest river in Nepal with a stimulating slope of 80 ft/m.

Nepal’longest and largest river, the Karnali springs fourth from the base of mount Kailash in Tibet, the centre of the universe for both the Buddhist and Hindus religious. Flowing south into Nepal it forms the major drainage system of the western districts. Karnali is one of the finest big volume river trips in the world, a classic expedition into Nepal’s remote, unpopulated “wild west”. From the stating point at sauli, the river drops into imposing canyons filled with powerful, big volume white water. These canyons flow into scarcely populated area of pristine jungle teeming with abundant bird and wildlife. Rapids like “Captivity”, “Flip and Strip” and “Gods House” are separated by just enough easier water to regroup and prepare for the next big challenge. Towards the end of the trips the river gradient begins to ease as the Karnali leaves the mountains and flows out into the Gangetic plains of the Terai. The jungle thickens as the river broadens, and the pristine beaches become bigger and more beautiful. 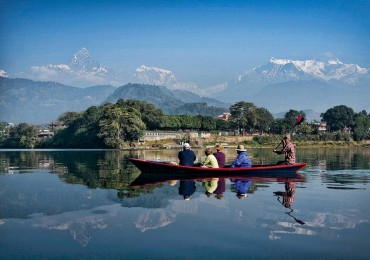 Boating is one of the many ways to relax, relieve stress and enjoy the nature around the river or the lakes. The numerous lakes and rivers in Nepal make boating one of the major attractions among the tourists as well as the locals. Be it floating slowly on the lake or playing against the rapids of the river, boating in Nepal is an incredible experience. The various lakes and rivers offer boating as an adventurous and recreational experience in many parts of Nepal.
Most famous boating destination in Nepal is the Phewa Lake in Pokhara. The island like structure in the middle of the lake housing the temple of Taal Barahi is one of the attractions here. Also, the clear view of the blue sky and the magnificent Machhapuchre (Fishtail Mountain) on the pristine waters of the Phewa Lake make it one of the favorite boating destinations. 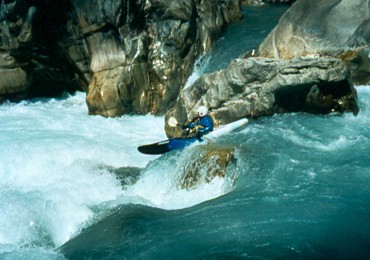 Kayaking in Nepal can vary from easy class II rapids on the Trisuli and Seti Rivers, to raging continous white water on rivers like the Bhote Kosi and Marsyangdi. Where you kayak while you visit Nepal is up to you. But be sure you understand the rivers, are confident with your skill level, and plan to kayak with friends who are of the same skill level or one you are comfortable. Kayaking Nepal’s rivers takes team work and planning.
With its wide range of rivers and wealth of challenging rapids, Nepal is the perfect destination for kayaking. Whether you are a total beginner or an experienced white water kayaker keen to tackle one of our more challenging rivers.