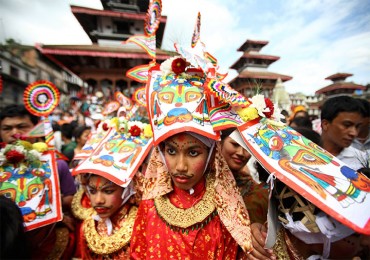 The festivals of Nepal have their roots in Hinduism as 82% of the population of the country is Hindu. Buddhism, the second-largest religion of the nation which accounts for 9% of the population, has influenced the cultural festivals of Nepal.
Generally Dashain falls in late September to mid-October, right after the end of the monsoon season. It is "a day of Victory over Demons". The Newars celebrate the festival as Mohani. Tihar or Diwali, Holi, Saraswati Puja, Rakshabandhan, Bhai Dooj, Janmashtami, Kali Puja, Gai Jatra, Nag Panchami, Teej, Chhath, Kartik Poornima, Maghe Sankranti, Ganesh Chaturthi, Maha Shivratri and Chhechu are other widely celebrated important festivals of Nepal.