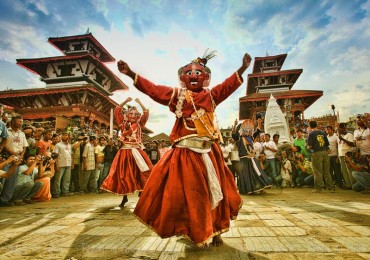 The culture of Nepal is rich and unique. The cultural heritage of Nepal has evolved over the centuries. This multi-dimensional heritage encompasses the diversities of Nepal's ethnic, tribal, and social groups, and it manifests in music and dance; art and craft; folklore and folktales; languages and literature; philosophy and religion; festivals and celebration; foods and drinks. Its culture is mostly influenced by Indian, Mongolian and Tibetan culture.

Legends state that dances in this country originated in the abode of Lord Shiva — the Himalayas, where he performed the tandava dance. This indicates that dance traditions of Nepal are very ancient and unique. Accompanying music and musical instruments change in tune with the themes, which revolve around topics like harvesting of crops, marriage rites, war stories, a lonely girl’s yearning for her love, and several other themes and stories from everyday life in the villages.

The majorityof people living here are Hindu and Buddhist.About 3.2% practice Islam and 3.6% of the population follows the indigenous Kirant religion. Christianity is practiced officially by less than 0.5%.
Nepalese philosophical thoughts are ingrained with the Hindu and Buddhist philosophical ethos and traditions, which include elements of Kashmir Shaivism, Nyingma school of Tibetan Buddhism, works of Karmacharyas of Bhaktapur, and tantric traditions.

The festivals of Nepal have their roots in Hinduism as 82% of the population of the country is Hindu. Buddhism, the second-largest religion of the nation which accounts for 9% of the population, has influenced the cultural festivals of Nepal.
Generally Dashain falls in late September to mid-October, right after the end of the monsoon season. It is "a day of Victory over Demons". The Newars celebrate the festival as Mohani. Tihar or Diwali, Holi, Saraswati Puja, Rakshabandhan, Bhai Dooj, Janmashtami, Kali Puja, Gai Jatra, Nag Panchami, Teej, Chhath, Kartik Poornima, Maghe Sankranti, Ganesh Chaturthi, Maha Shivratri and Chhechu are other widely celebrated important festivals of Nepal.

The pagoda architectural tradition figures prominently among Hindu temples in the country. The pagoda architectural tradition as well, along with the Tibetan tradition of Buddhist architecture and the stupa in contrast is widely used among Buddhist temples throughout the country.
Protection and maintenance of archaeological sites, ancient monuments including remains of national importance, museum and archive management are the main concern of Department of archaeology.