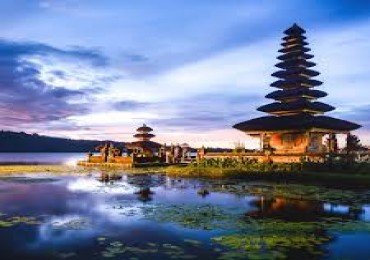 Indonesia straddles the Equator between the Indian Ocean and the Pacific Ocean. While it has land borders with Malaysia to the north as well as East Timor and Papua New Guinea to the east, it also neighbors Australia to the south, and Palau, the Philippines, Vietnam, Singapore, and Thailand to the north, India to the northwest.With 18,110 islands, 6,000 of them inhabited, Indonesia is the largest archipelago in the world. About 261.1 million (2016 world Bank)people live in this fourth most populous country in the world — after China, India and the USA — and by far the largest country in Southeast Asia by an area of 1,904,569 square kilometres.Indonesia also has the largest Muslim population in the world.The capital city of Indonesia is Jakarta.The currency is indonesian rupiah and official language is Indonesian.The literacy rate is about 94%.
The climate of Indonesia is almost entirely tropical. The uniformly warm waters that make up 81% of Indonesia's area ensure that temperatures on land remain fairly constant, with the coastal plains averaging 28 °C, the inland and mountain areas averaging 26 °C, and the higher mountain regions, 23 °C. Temperature varies little from season to season.In general, temperatures drop approximately 1°C per 90-meter increase in elevation from sea level with some high-altitude interior mountain regions experiencing night frosts.
The major attractive places of indonesia are Borobudur,Tanah Lot,Prambanan,Uluwatu Temple,Mount Rinjani,Bali Safari and Marine park, sanur Bali ,Istiqali Mosque, Jakarta, Patenggang Lake,etc.
Compared with many places in the world, Indonesia is fairly safe for travel.
Tourism in Indonesia is an important component of the Indonesian economy as well as a significant source of its foreign exchange revenues. The vast country of sprawling archipelago has much to offer; from natural beauty, historical heritage to cultural diversity. According to the World Travel and Tourism Council, the direct contribution of travel and tourism to Indonesia's GDP in 2014 was IDR 325,467 billion (US$26,162 million) constituting 3.2% of the total GDP. By 2019, the Indonesian government wants to have doubled this figure to 8 percent of GDP and the number of visitors needs to double to about 20 million.The tourism sector ranked as the 4th largest among goods and services export sectors.Singapore, Malaysia, China, Australia, and Japan are the top five sources of visitors to Indonesia. 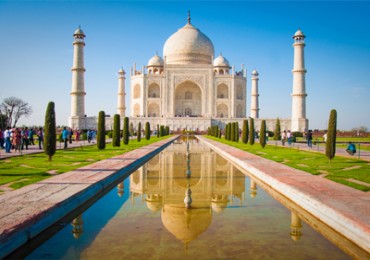 India is a vast South Asian country with diverse terrain – from Himalayan peaks to Indian Ocean coastline – and history reaching back 5 millennia.It is the seventh-largest country by area of 3.287 million km², the second-most populous country (with over 1.2 billion people), and the most populous democracy in the world. It is bounded by the Indian Ocean on the south, the Arabian Sea on the southwest, and the Bay of Bengal on the southeast. It shares land borders with Pakistan to the west;China, Nepal, and Bhutan to the northeast; and Myanmar (Burma) and Bangladesh to the east. In the Indian Ocean, India is in the vicinity of Sri Lanka and the Maldives.The official language of India is Hindi and English and the currency is Indian rupee.The literacy rate is 74.4%.The major religion of india is 79.8% Hinduism,14.2% Islam,2.3% Christianity,1.7% Buddhism,etc.
Summer or pre-monsoon season, lasting from April to June (April to July in northwestern India). In western and southern regions, the hottest month is April; for northern regions of India, May is the hottest month. Temperatures average around 32–40 °C (90–104 °F) in most of the interior.
The major attractions of india are Agr,Amritsar, Nainital, Ooty, Jaipur, Shillong, Goa, Shimla, Tirupati, Pondicherry, etc
As a rule India is quite safe for foreigners. Unfortunately common theft, violence and armed robbery occur. A thief may pickpocket (see pickpockets) or break into the room. Agree on all fares and payments for services clearly in advance. Being told that you can pay "as you like" is a bad sign. Strangers offering assistance or services may be dishonest; see Common scams. Be wary of frauds at tourist attractions such as the temples of Kanchipuram, Kalighat etc. While travelling in public transport don't accept food or drinks. It could have substances that cause unconsciousness.
Tourism in India is economically important and is growing rapidly. The World Travel & Tourism Council calculated that tourism generated 14.02 lakh crore (US$220 billion) or 9.6% of the nation's GDP in 2016 and supported 40.343 million jobs, 9.3% of its total employment. The sector is predicted to grow at an annual rate of 6.8% to ₹28.49 lakh crore (US$440 billion) by 2027 (10% of GDP).[1] In October 2015, India's medical tourism sector was estimated to be worth US$3 billion. It is projected to grow to $7–8 billion by 2020.In 2014, 184,298 foreign patients traveled to India to seek medical treatment.